If you have been to a Boxford Masque already, you’ll be glad to know there’s a new one in preparation for Summer 2020 based upon the characters in the fabulous and only recently discovered Boxford Roman Mosaic.  If the first six have passed under your radar, you might like to know what you’ve been missing.

Originally, masques were lavish musical spectacles staged for kings, queens and courtiers.  Early last century, in Boxford, well-to-do Charlotte Peake began writing her own ‘masques’ for performance by family and staff, and for the enjoyment of her arty circle of friends.  Her stage was a natural amphitheatre at the top of Hoar Hill, overlooking most of the county.  In ten years they became a village tradition.

Reviving her tradition was the idea of a Boxfordian John Vigor whose determination saw the first modern Boxford Masque staged in 2000.  His idea caught on.  Audiences outgrew the hilltop amphitheatre, and in 2012, at the kind behest of the Puxley family, the Masque moved to Welford Park.

In 2020, our 20th anniversary year, we will return to Boxford at therecreation ground and create a show based on the nearby Roman Mosaic!

With songs specially composed, dancing, lovely costumes, a huge cast of local men, women and children, and fully professional production values, a Boxford Masque is always a sight worth seeing.   …And thanks to ‘the Boxford Magic’ we have only ever lost one performance to rain.   Make the most of it.  Bring a picnic and a bottle of wine.  Enjoy the ravishing vistas, the sun setting during Act 2, the flare path lighting your way home…

Masques were invented to entertain royalty.  The Boxford Masques are made for you!

Want to get involved?

Steve more recently fell in love with The Masques, joining our team for the 2012 production after moving into beautiful Boxford.

Now fully addicted to our unique brand of theatrical magic, Steve has immersed his entire family in rediscovering hidden or neglected talents to help the Masques. 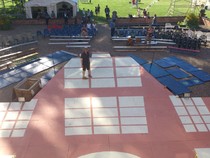 Ade is our uniquely talented Director. A stalwart of the Masques, his passion and commitment helped raise the Masques from the mists of time when, with local man John Vigor, he found the original Edwardian scripts and natural amphitheatre in Boxford.

Ade's energy drives a bunch of enthusiastic amateurs to deliver professional standard theatre and his patience with the younger members is legendary.

Ade's insight and talent for seeing things which only he can see, are the reason that the Masques can bring magic to life for a few brief nights on warm and dreamy summer evenings.

Geraldine is a world famous children's author and writer of the past 3 Masques. Her fame exploded when she was chosen by Great Ormond Street children's hospital to pen the follow up to the original Peter Pan entitled 'Peter Pan In Scarlet'.

Her unique and talented mind is feverishly working to bring you a new Masque. We know it will be funny, intriguing, romantic, slightly supernatural and amazing. Just like our lovely Geraldine herself! 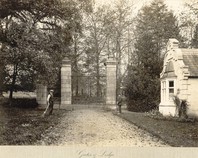 We have a large number of children in our cast and their safety and enjoyment is our number one concern. Polly is an experienced and qualified carer who is responsible for all aspects of safeguarding during The Masques.

If you have any queries or concerns, drop her a line, she is brilliant!

WE ARE ON THIS YEAR!

Dream big and join us this summer for a spectacular community theatre extravaganza!

Details on the show page.

Did you know that simply by shopping at Amazon, you can support The Masques?

1. Go to Smile.Amazon.co.uk whenever you are shopping online,
2. Select Boxford Masques as your charity of choice,
3. Go shopping!
Or, you can go directly here:  https://smile.amazon.co.uk/ch/1098753-0